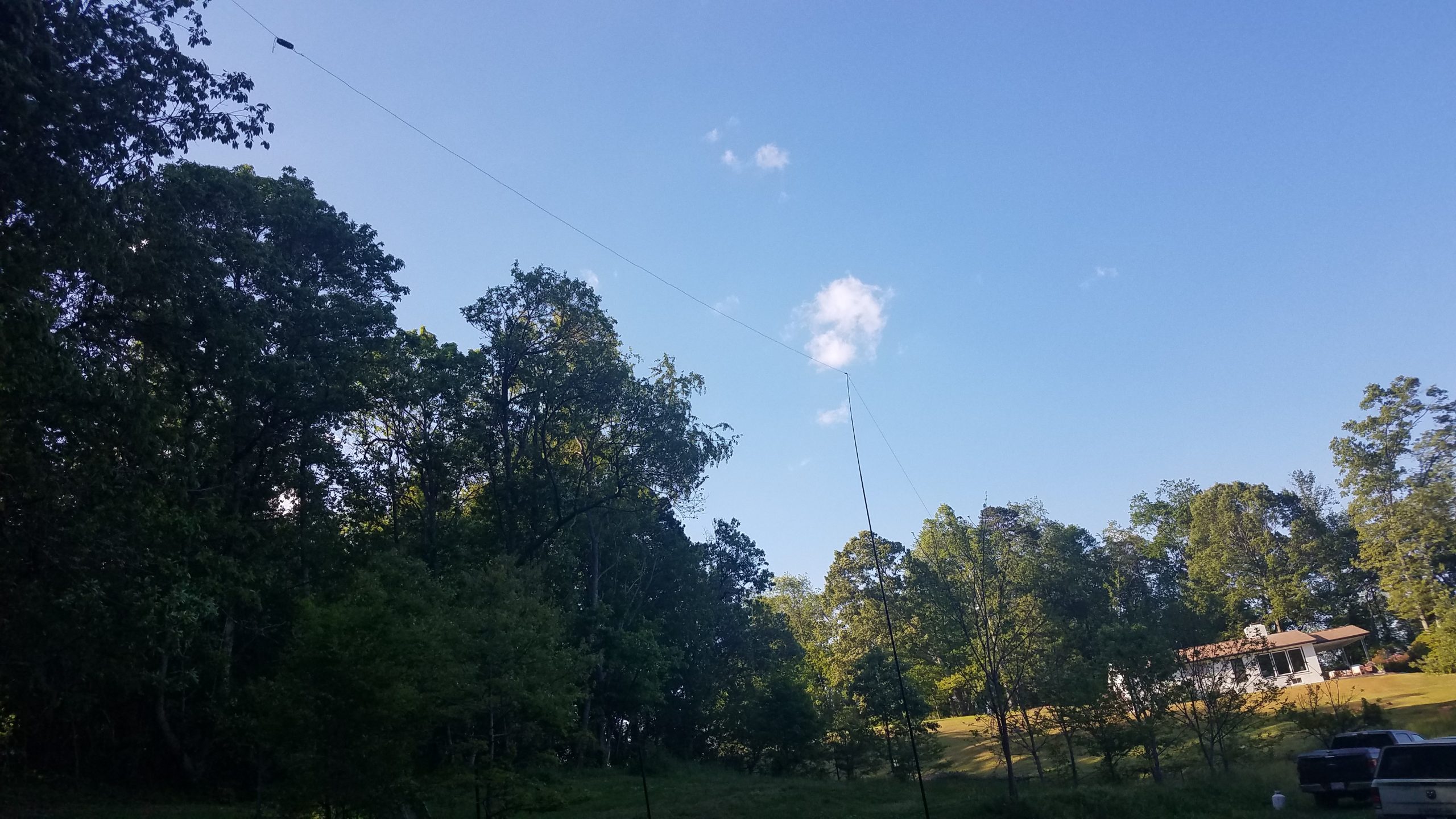 In the portable antenna world, it is often difficult to find the balance between portability and performance. It’s no secret that big antennas just work better. I’ve often said that the key to having good success with QRP and portable operations is ‘wire in the air’. Unfortunately, in many instances, bigger isn’t always better. Many places often barely have room to turn around, let alone deploy a big antenna. This is further compounded by a lack of usable supports. In many areas, trees for antenna support are either too small, non-existent, or just simply not in the right places. The antenna market has tried to tailor to this crowd. We’ve all seen the type; “Super special wonder military antenna! Works on 160m through 70cm without a tuner! Only 10 feet long when deployed!”. You know what else is small and works on 160m through 70cm without a tuner? A dummy load. In an effort find a good balance between portability and performance, I purchased the SilverTip Antennas Portable 20m Vertical.

SilverTip Antennas is a small family-ran company from Virginia that makes a wide variety of excellent products; one of which being their portable 20m vertical. This antenna is a quarter wave on 20m, collapses to less than 26 inches, and weighs just under 1.5 lbs. The main radiator is a wire fed through a telescoping fiberglass pole. The antenna comes with 4 ground radials, made from the twisted pair wiring found in ethernet cable. Setup is super easy and quick, and the antenna can stand freely on its own with no extra supports. The antenna has low SWR across the entire 20m band and is an excellent performer. It’s my antenna of choice for portable operations when space is tight, or when usable antenna supports are few and far between.

After I purchased the antenna, being the experimenter I am, I made some additions to mine. The first was an adapter to convert from the spade terminals on the antenna to a BNC connector. This allowed me to run regular RG-174 coax. The second thing I added was a loading coil. My original goal was simply to add 40m capabilities to the antenna, but by accident it did much more than that.

To build my loading coil, I needed a former to wrap the wire around. I found a plan on Thingiverse for a coil former and printed it out on my 3D printer using black PETG filament. This former had small grooves to hold the wire in place. For the wire, I chose craft wire because it is thin, but stiff enough to hold to the former. I wrapped the wire around the coil, and put some beads of hot glue on it to keep the windings from loosening up over time and changing the induction. After that, I attached the appropriate spade terminals on it; one on the bottom to connect to the coax adapter, and the other on top to connect it to the radiating element of the antenna. On the top connector, I connected it to a clip lead so that I could clip to different parts of the coil to change the inductance. After I finished building the coil, it was time to set up the antenna and put the antenna analyzer on it. What I found was surprising. When tapped the coil at the top, the antenna became resonant on 60m, which I was not expecting. From there, I proceeded to use trial and error to find and mark taps for 40m and 30m. Excellent! I had just turned my single-band antenna into a quad-band antenna! SWR was low across the bands, and it performed well.

I successfully ran with this setup for a while, but I wondered how hard it would be to add 80m. At this point, I set the coil to maximum inductance, and connected the antenna tuner. Even with a good antenna tuner, the lowest SWR I could get on 80m was 4:1. No joy. The thought occurred to me to build a bigger coil, but since this was an antenna I frequently backpacked with, I wasn’t enthusiastic about the extra weight or footprint. After all, how well would antenna a fourth of the size of a full length one really perform at QRP levels?

I abandoned the idea of 80m portable for a while, since most of my portable operations are done during the day when 80m really isn’t a great performer. As time went on though, I found myself purchasing gear to break into overnight backpacking. So, my mind went back to 80m antennas. Unfortunately, ~133 feet of wire was not something I was really looking forward to packing with me. I started thinking again about loading coils. Then, one night; it hit me. I already had an antenna for 60m, which is really not that far from 80m. I quickly did the math. My coil had an inductance approximately 23.1 μH, which meant that my vertical only needed to be extended by about 16 feet to make it resonant on 80m. This was doable. In order to extend it, I decided to make it into an inverted L. This allowed it to remain small, portable, and easy to set up. So, like with all antennas, I started bigger and trimmed to resonance. I cut off a length of wire, installed a clip lead on one end, and an insulator on the other. The clip lead easily connected to the small metal loop on top of the vertical and I ran the wire over to a nearby tree. Since the fiberglass vertical is very flexible, I used mason line as a guy wire between the top of the vertical and a lawn chair opposite the horizontal wire; in order to keep the antenna as straight up as possible and to avoid any undue stress. After much trimming and checking; I found the magic length: 15′ 9″. This puts the ‘dip’ at 3.74 MHz; the center of the 80m band. SWR here is 1.4:1, and SWR stays below 3.2:1 for the entire 80m band. On the edges of the band, this can easily be cleaned up with a simple antenna tuner. While 3.2:1 isn’t great, it’s not bad given the inherent challenges of designing “wide-band” 80m antennas, especially when using a loading coil, which almost always increases Q.

Performance wise, it seems to do well so far. Between the time of day, and lots of static crashes from nearby storms, band conditions weren’t great. I did manage to successfully make contact with Tim, KA4LFP. I’ll try again when the band is a little quieter. Overall, is it going to beat out a traditional half-wave dipole? No, but it is going to make portable 80m operation more realistic without a major sacrifice in performance. I’ll keep testing it in the next few weeks, and let you know how it turns out!